FRIENDS OF KAREN ANNOUNCES ELECTION OF NEW BOARD MEMBER 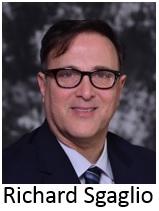 NORTH SALEM, NY, JUNE 26, 2019 -- Friends of Karen, which supports critically-ill children and their families, has elected a new member to its Board of Directors, Westchester resident Richard Sgaglio.

Richard Sgaglio, Ph.D. is a marketing and development professional with more than 20 years of experience, the majority of which spent in the healthcare industry. He is Vice President of Marketing at The Osborn in Rye, NY, a senior living community opened in 1908. He is responsible for the organization’s marketing, communications and development functions. Prior to joining the Osborn, Richard was a Vice President at Burke Rehabilitation Hospital, where he was for nearly 10 years.

Richard’s interest in Friends of Karen began when he moved into the North Salem area nearly three years ago. “I wanted to get involved with local organizations,” Richard recalls. “Despite not having children of my own,” Richard continues, “they’ve always been my soft spot.”  Donating to the organization regularly was fulfilling, but Richard wanted to be involved in a more direct way. Richard notes “I love that Friends of Karen’s mission goes beyond just the child that’s affected by illness. They help with the whole family, including doing great work with siblings.” Richard’s passion for the cause comes through when discussing the work of Friends of Karen with others. “You don’t need a sick child to get involved. Making a donation and volunteering your time allow you to be involved.”

Richard lives in North Salem with his partner and when he isn’t working, enjoys spending time at their cabin in the Berkshires. In addition to his work with Friends of Karen, Richard enjoys volunteering at other area non-profit organizations including Second Chance Foods, an organization that repurposes fresh foods for distribution at food pantries in Westchester and Putnam Counties, and the Putnam County Humane Society, which is a no-kill shelter. He is also a co-founder of The Nevada Partnership for Homeless Youth, an organization that assists runaways and children on the streets of Las Vegas by providing them with food, shelter and other basic services.

“We are so very fortunate to have Richard join us on the board,” said Paul Smadbeck, Friends of Karen Board President. “In addition to his enthusiasm for Friends of Karen’s mission, which is palpable, he’s exceptionally accomplished and his professional expertise will be instrumental in helping us further our mission and strengthen our ability to help more families caring for critically-ill children in the tri-state area.”